Watch out, Waze: INRIX’s new Traffic app is coming for you

Good article from Cars Technica about our new Traffic App: 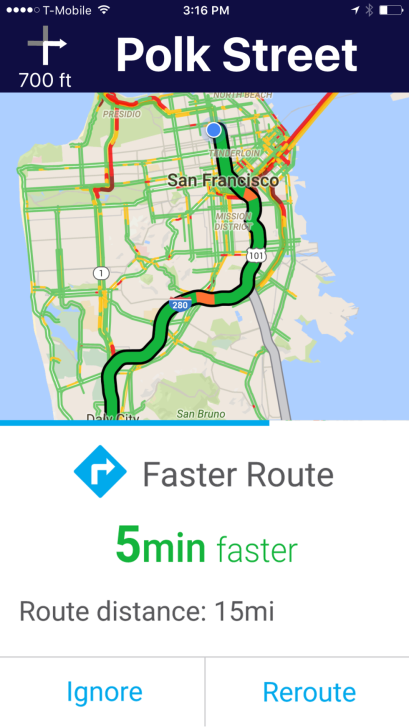 You may not have heard of INRIX, a traffic data company based in Kirkland, Washington. But if your car’s navigation system has real-time traffic data, there’s a good chance you’ve been using its services. For example, the Audi A4 and Telsa Model X we drove earlier this month get real-time traffic data from INRIX. In the BMW i3 and i8, INRIX provides the range finder service that lets you know how far you can go before needing to recharge (and where you can do that).

Today, the company is taking aim at the mighty Waze with a new smartphone app that leverages its vast crowdsourced traffic database.

Do you remember what it was like trying to navigate in days of old? Back when some of us started driving, if you didn’t want to get lost, you needed a map. (Remember them?) In 2000, then-President Clinton opened up the US’ GPS network, and consumer navigation systems started to proliferate, first as standalone devices, then as installed infotainment systems in our cars, and finally on the screens of our smartphones.

The addition of live traffic updates might have been almost as significant. Suddenly, a navigation system wasn’t just useful for finding your way on unfamiliar roads. Even on a regular commute—one you might drive five days a week, year after year—a navigation system could alert you to jams, roadwork, or hazards.

INRIX has been in on this action, offering iOS and Android traffic apps for a while now, but this latest version looks like a big upgrade in functionality. For one thing, it adds turn-by-turn navigation. “So what,” you’re probably thinking, given that the default map apps for both platforms already have this capacity. In this case, however, the navigation is informed by INRIX’s real-time traffic database, which is constantly updated via the 275 million cars and devices (worldwide, not just in the US) that are already using INRIX’s services.

Perhaps the more interesting aspect is the use of machine learning. Rather than having to manually enter favorite or frequently visited places, Traffic will keep tabs on your routine and work out for itself your frequently traveled routes, including the times of day you make those trips. Like Waze, the apps will interface with your calendar and alert you to the best time to get on the road.

And you can also plan trips based on when you need to arrive at a given destination (a feature Waze recently added for iOS, but which is yet to make it to Android). A neat touch here is a little more customization of alerts, so you can choose how much advanced notice you’re given regarding when it’s time to get on the road; the site’s traffic (using its cloud servers) will keep tabs on this and adjust the notification based on the predicted congestion.

It also takes a slightly different philosophical approach to finding you the quickest route. As anyone who uses Waze knows, these apps are always on the lookout to shave time off your route. This often means sending you through sleepy residential streets replete with speed bumps or telling you to make left turns across busy roads. INRIX takes a different approach, according to Joel Karp, INRIX’s director of product management.

“A great example of this; I just moved up from Los Angeles to Seattle (where INRIX is headquartered), and whenever I needed a route, it always took me on the major freeways, which I never drove. Because we have machine learning and we’re learning your preferred route, and because we think humans are creatures of habit who are unlikely to deviate off that route unless there’s a significant time delta—not 10 seconds, not 45 seconds, not two minutes, we think it’s six-plus minutes—we’re monitoring that route to make sure it’s the right one for you to take that day and if not, whether you know what the better route is, as opposed to just serving up any old route,” he told Ars.

We’ve only been playing with Traffic for a day or so at this point, but it feels like a credible alternative to the Google-owned Waze (even if there’s no road candy to collect nor cat avatars to choose from). If you feel like trying it out, it’s available now via Google Play and the App Store.

Posted on April 1, 2016, in Uncategorized. Bookmark the permalink. Leave a comment.